Wireguard is a new VPN solution that will probably be added to the Linux kernel in the near future. According to their own information they “aim to be faster, simpler, leaner, and more useful than IPsec, while avoiding the massive headache”, which judging from my own setup experience with Wireguard and my theoretical experience with IPsec seems to be true.

As an advantage however, we can save a lot of money over cloud providers (if servers are running 24/7) and we can even have better failure resilience if we can run our service across multiple different hosting providers.

Once wireguard is installed you should be able to load the kernel module with modprobe wireguard without rebooting your server.

At first we have to create public and private keys for each host:

With these keys we can then create the wireguard configuration files. Each of the hosts has their own configuration file containing its own private key and the public keys of all other hosts it is connected to. Which topology you use to virtually connect your servers depends on your exact situation. If you only have a few servers, you might want to create a fully connected mesh network (i.e. each host is connected to each other host directly). If you have multiple sites on different continents you might also want to connect them through only one gateway. And if you have a large number of hosts, you might want to create a partly connected mesh network.

The following image shows the physical setup of my hosts and my client PCs. The bold green line indicates the Virtual Private Network I created with Wireguard. I did not draw other (possibly malicious) hosts on this chart, but of course I am not the only one connected to Hetzners Intranet Router. There are other hosts connected, too, which is why it is not a trusted environment for communication between Hetzner VPN and Hetzner Root Server. 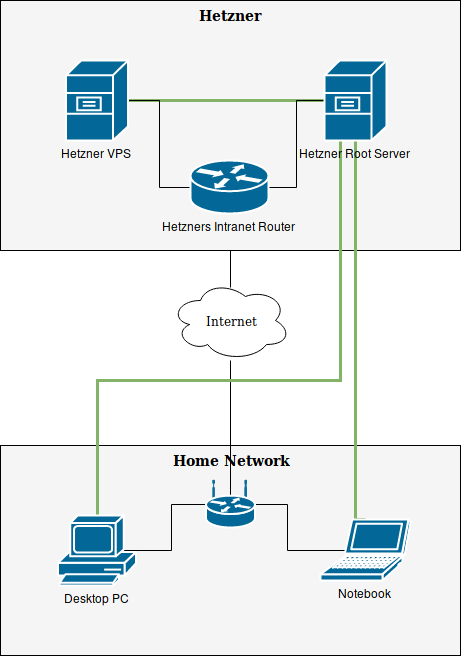 There is one peer node known to this host at the given real IP address listening on port 51821. The AllowedIPs field for a fully connected mesh network will be set to the virtual IP address of the node 10.0.0.3 (i.e. only traffic that goes to the host directly is sent there), but might be a complete IP range if you use a gateway host. We will see this later when we setup a client PC to connect to the VPN.

The other host will have the same configuration file with reverse values:

With this configuration defined you can already start wireguard with the wireguard-tools:

If you run this command on both hosts depending on your firewall configuration you might see an established connection or not.

I will list a full set of iptables settings. If you already have iptables setup you will probably only need the line to “allow connections to wireguard from other hosts”.

The same iptables adjustment has to be made to the other hosts.

With the wireguard port now open the connection between both hosts should work fine and you should be able to ping 10.0.0.2 from host 2 and 10.0.0.3 from host 1.

To achieve this, we have to connect our desktop clients to the virtual private network somehow. Since they are not static hosts, we should regard them as road warriors. The setup will be pretty much the same, except that the hosts do not know the real IPs of the road warriors (as these will probably change from time to time) and the clients will have a PersistentKeepalive setting to keep the connection established and avoid problems with NAT’ing and the firewalls of ISP-provided routers (which you might not be able to adjust as wanted).

Again, you have to create keys for the new machine:

The host configuration will get an additional entry like this:

We also have to add our clients IP (hopefully does not change to often) or allow the whole wide world (once wireguard is officially released) to iptables:

On the client you also have to create a wireguard configuration file again:

Unlike all previous configurations the AllowedIPs field now allows multiple IP addresses. This is, because we want to connect to host 1 from our client machine and then be able to reach all servers in the virtual network. Whenever we communicate with any IP from 10.0.0.0 to 10.0.0.255 now the IP controller of Linux will send the traffic to host 1. Host 1 is then responsible for forwarding the traffic to the other hosts.

To achieve this we have to adjust our previous configuration of host 1 a bit. We will add commands to execute after the interface came up and after it was taken down. These commands will setup forwarding rules for iptables:

In most tutorial about wireguard you will see the rule iptables -A FORWARD -i wg -j ACCEPT instead of -I FORWARD 2. This only works if your forward rules were not setup previously. I already had the following rule in my FORWARD table as last rule:

Appending another rule would have added it after this reject rule and thus achieved nothing. Thus, I append my rule as the second rule.

I am not exactly sure where this rule came from, but I suspect it is created by docker.

Also make sure that IP forwarding is enabled on the host with the sysctl option net.ipv4.ip_forward:

If this option is set to zero, change /etc/sysctl.conf or your custom configuration files in /etc/sysctl.d/ (if supported by your system).

Once you enable wireguard on your desktop PC with wg-quick up /etc/wireguard/wg.conf now you should be able to ping both hosts.

To restrict Gitlab to the VPN we can either make nginx listen only on the private network interface or setup Allow and Deny rules. I chose the latter, because I could not manage to bind nginx to different interfaces for different virtual hosts and it would also have made certificate requests from Let’s Encrypt much more difficult. On the other hand, it can be argued that you should use self-signed certificates for internal services, which is exactly what I might be doing in the future.

My nginx site configuration files now look similar to this:

This is the configuration file from my own reverse proxy nginx that just forwards traffic to Gitlab.

I created ansible roles to setup wireguard on multiple hosts with road warriors and to setup nginx configurations for a reverse proxy situation.