Sometimes there is criticism, but most of the time pornography industry leads a pretty easy-going life whereas other industry (e.g. currently web industry with regards to privacy) has to justify.

Moreover, I also want to show how you can create statistics from some data you have.

Doing this is pretty easy if you have a list of actresses’ names. Just get all the names, split of the first word until the first space and sum up all occurrences. Of course you can say that some actresses could have double names, but as they are stage names, I guess still the first name would be the more important and common one. I even doubt that many people will choose double firstnames as stage names.

We use the Natural Language Toolkit (NLTK) which includes features for a lot of tasks in natural language processing. This is the first project I am doing with it. NLTK comes with a utility for frequency distribution, we can throw a list inside and get back an object we can directly plot.

The mostly used firstname is Nikki (40 actresses call themselves like this) followed by Vanessa and Victoria (both more than 35 occurrences). Then come Kelly, Ashley, Jessica, Angel, Samantha, Tiffany, Michelle and so on. 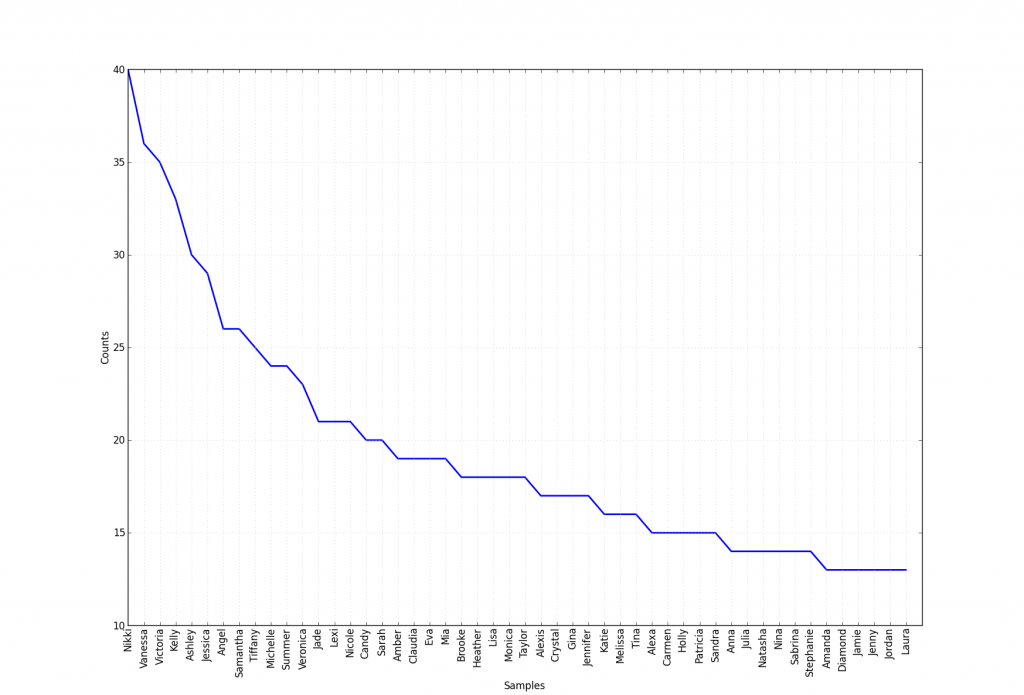 Let’s do something more complicated. Now we want to see which words are most commonly used in the titles of American pornography productions. There are some interesting results, but first let’s again have a lot on how we can get such an analysis.

To be able to group similar words together we also use stemming. This reduces a word to its stem (which is. a bit similar to the grammatical stem of a word, but not necessarily the same).

In Python the code for keyword generation can look like this:

Then we throw all these keywords into a frequency distribution. We also reduce the number of displayed items in our plot to the 100 most frequent, because there are just too many different words to display them all in one plot.

Then pornography industry likes to use derogative words like slut, whore or bitch paired with dirti (stem of dirty). On the other hand, purity and youth play a large role: teen, young, first, angel, virgin.

Interesting is that there are so many episodes of Barely Legal, it even got into the top used keywords (check the stem bare and legal in the graph). 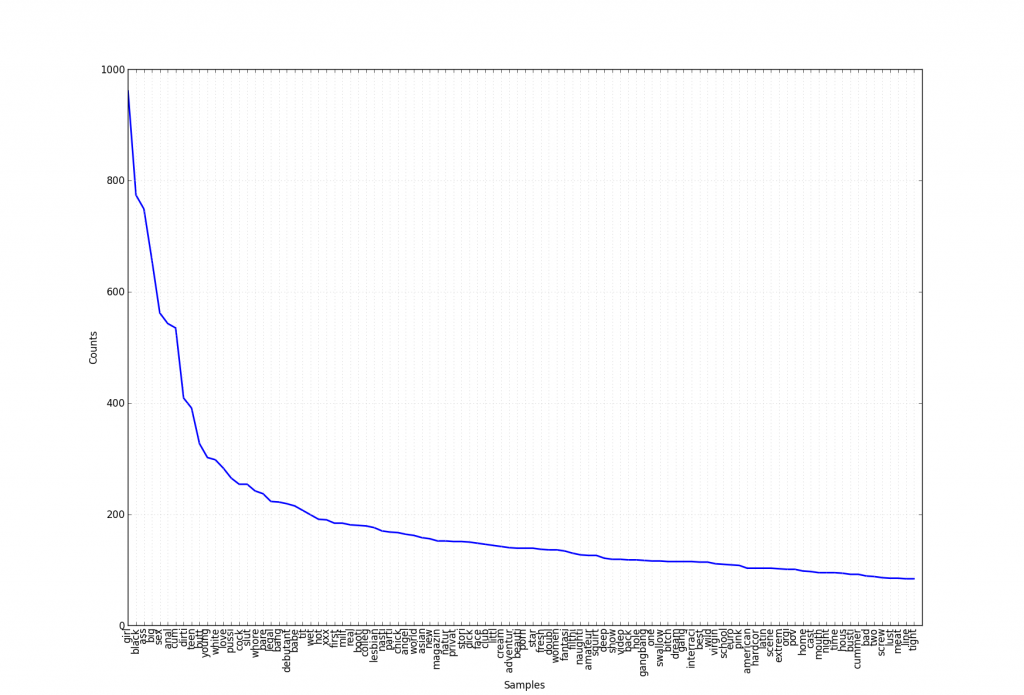 So how do we do this? With the NLTK package it’s actually quite easy, but all details come from an answer on stackoverflow. We already used the frequency distribution utility, now we will use it to count both single words and bigrams. A bigram is just a tuple of two words that follow each other. In the text “I am a man” we have three bigrams: (I, am), (am, a), (a, man).

These two distributions are then thrown into a class BigramCollocationFinder which does all the calculating for us.

To avoid finding collocations through dots, we have to ensure that words after and before a dot cannot be seen as a bigram. I most normal circumstances this is not important, because sentence endings and beginnings differ too much, they will not be seen as collocations, but as we only use mini sentences of mostly 2-3 words and many of them begin with she we have to watch out. So we split dots as distinct words with the WordPunctTokenizer and then we filter special characters out. We also want to filter stopwords as these collocations are not really useful.

In source code the whole action looks like this:

You might have recognized that there still is an unknown variable fulltext. It holds all values from our scene analysis. How you build this depends on how the data is saved, but it could look like this:

Let’s see what collocations are found in all scene descriptions:

Of course collocation finding is always a bit difficult and if you can, you should control it manually. As already mentioned in the technical approach section this is not sorted by number of occurrences, but by collocation strength (how often do these words occur together and how little not together).

Skimming through the words, you might see that there are a lot of real collocations, but sometimes there seems to be missing something. These are then probably trigrams (three words following each other). Look for example at “self titty”, what should that mean? Very probably it belongs together with “titty play” to the trigram “self titty play”. With a similar method to the above code (only changing bigram to trigram), we can find out the strongest trigrams:

What are the most common actions in pornography?

At first we just want to see which words are mostly used. This will give us a quick overview over the data we have.

For this we just use a frequency distribution again and fill it with all the words we have: 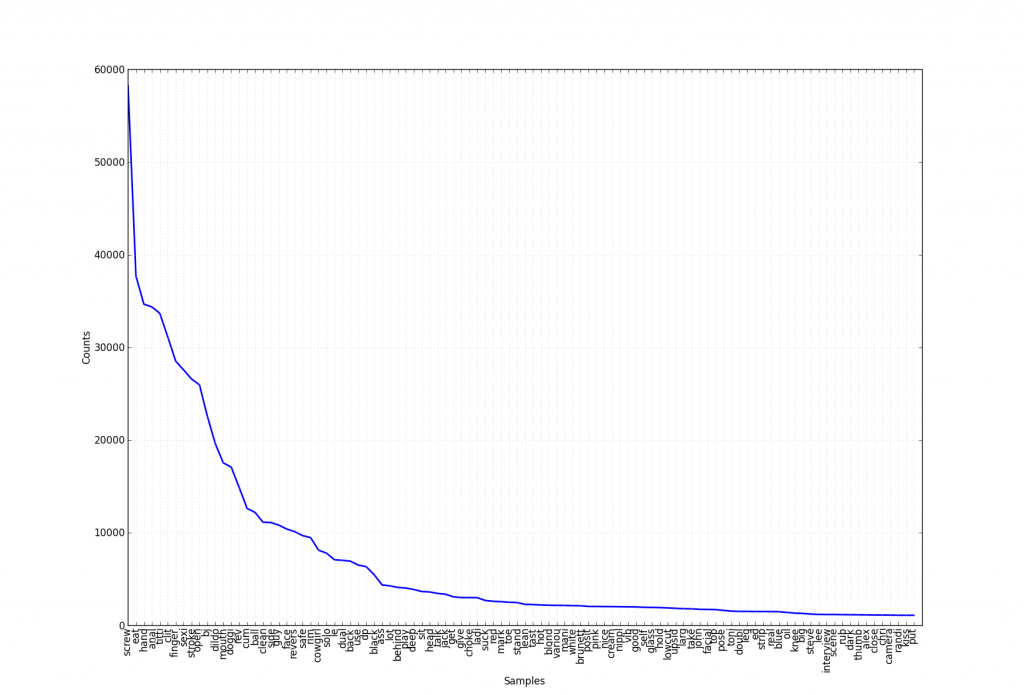 And if we only count each occurrence in a movie once: 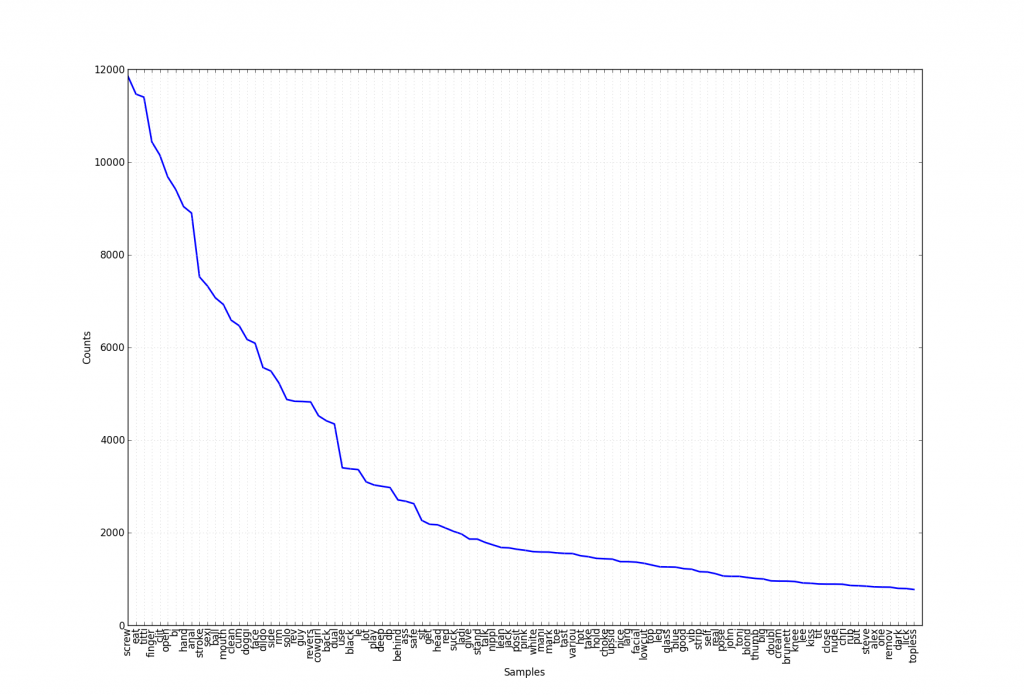 Next thing we want to do is find out more specifically which positions are often shown.

This is some manual work, but in natural language processing you will often have to work out things manually to improve them. As we already saw before, we can use the collocations to get an overview over positions, but we have to remove clothings like sexy red dress before. We also remove some collocations that do not provide more information than the single word (e.g. doggie position does mean the same as doggie, but dp doggie is something different). Then we combine the collocation positions with some keywords from the most frequent words and then check which is how common (if we find a collocation we remove it, so that it will not be counted as single word again). 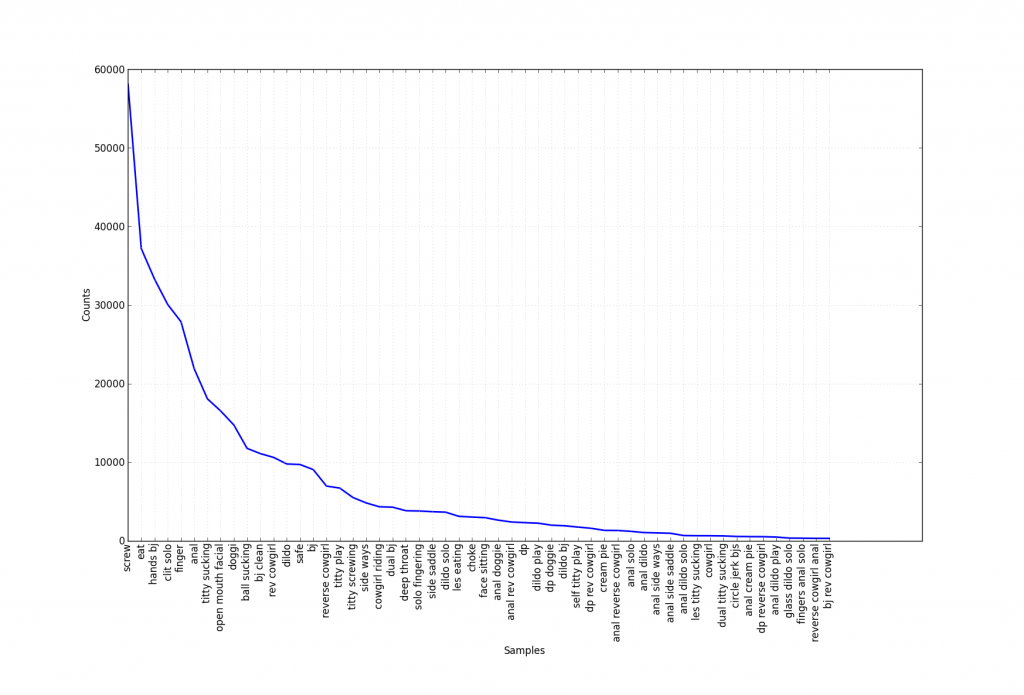 Maybe you also think – like me – that this is not good enough yet. Many terms are there twice, because we did not use stemming on the composite terms or because the website uses abbreviations (rev and reverse). So let’s create display groups. All we have to do is create a Python dictonary with the old positions as keys and the names they shall be mapped to as names. 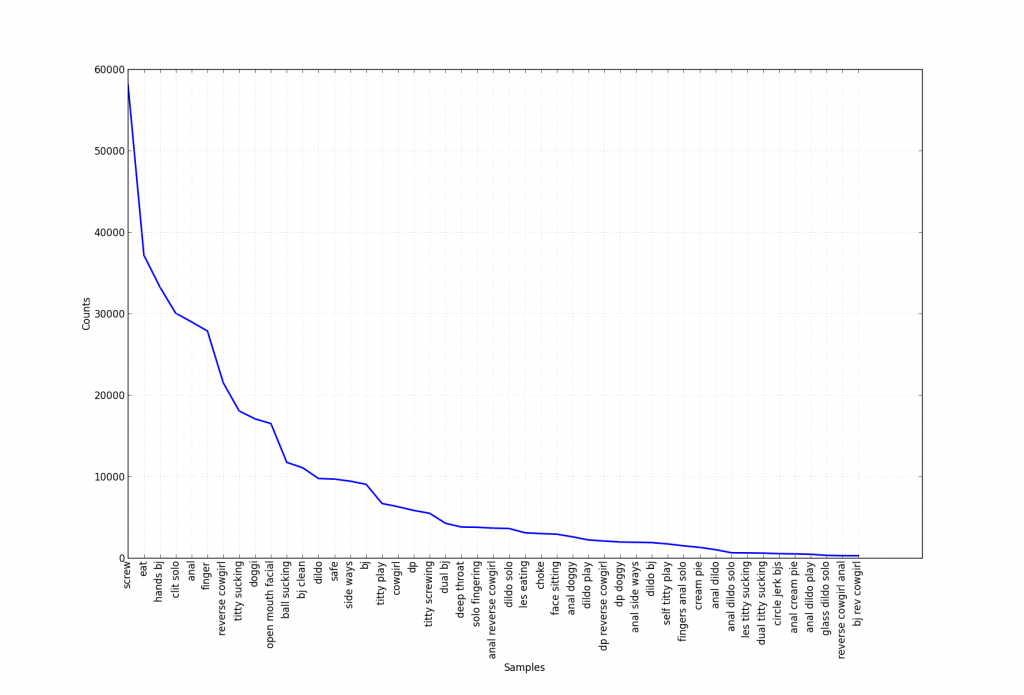 Of course you can always extend such questions to get even more interesting results.

However, it has been a long time since I worked on this article and I do not have my raw data anymore. Maybe you want to continue my work?